Everything You Need To Know About Vitamin K2D3

Why
Vitamin D
How To
D2D3
Vitamin K
Combining Them
Conclusion

Author: Brett Melanson is a PhD Candidate in Behavioral Neuroscience. His interests primarily reside within the life sciences with an emphasis on stress-based psychopathologies.

Vitamin D… Are You Getting Enough?

Truly, the only way to know if you are getting enough vitamin D in your diet is to have this checked by your physician.

However, evidence shows that roughly 24-40% of the population is actually vitamin D deficient—meaning they have less than the recommended amount of vitamin D in their blood.

Fortunately, there are common risk factors that may be responsible for vitamin D deficiency, so getting to know these factors are a good way to educate yourself and understand if you may be susceptible to this condition.

These risk factors include:

If you think you experience any of these risk factors, it’s time to educate yourself about the necessity of vitamin D in the diet.

Vitamin D Is Very Important For Your Immunity And Bones

Specifically, there is evidence that vitamin D can actually boost your immune system by increasing its ability to fight infection and reduce inflammation. And, increasing vitamin D in the diet was associated with a large reduction in the rate of respiratory infections such as the common cold.

Interestingly, because COVID-19 is mainly associated with inflammation in the lungs, this raises the question as to whether vitamin D is an important factor in reducing the severity of this disease.

While early studies suggest it may be effective in reducing the death rate associated with COVID-19, other clinical studies are being carried out as you are read through this article.

So, we should know soon whether it truly is an effective vitamin in the fight against COVID-19.

Other than giving an immunity boost, vitamin D is also important for bone health.

Specifically, studies have shown that deficiency in this vitamin can actually lead to weak bones which is associated with a health condition known as osteoporosis.

At the same time, when vitamin D levels in the blood are low, a specific type of chemical, known as parathyroid hormone, increases.

This is bad news for bones as well because parathyroid hormone is known to reduce the density, or the overall strength, of bones.

So, What Exactly Is Vitamin D And How Is It Made In The Body?

For starters, vitamin D is a fat-soluble compound.

You see, every cell in your body is made up of a “fatty layer” that is meant to protect components inside the cell from dangerous agents and particles found in the external environment that can disrupt its normal function.

In order for vitamin D to work properly, it has to be able to get inside the cell to cause changes at the level of the nucleus, which is a compartment within the cell that contains all of your DNA.

So, fat-soluble simply means that vitamin D is able to pass freely through this fatty layer and enter the cell to carry out its duties.

Now, where do you think vitamin D is produced?

Nope, in fact, a significant amount of vitamin D production actually starts with your skin.

That’s right—the skin is an organ too!

To do this, your skin requires a good amount of a specific kind of light known as ultraviolet light (commonly referred to as UV).

Importantly, the sun gives off a significant amount of natural UV light, which is why sunlight plays such a critical factor in avoiding vitamin D deficiency.

So, All I Need Is More Sunlight And I’ll Produce More Vitamin D?

Great question, but not exactly.

Both of these compounds are produced by sunlight and are eventually transformed into vitamin D by the liver.

This is where it gets interesting, because studies have shown that vitamin D2 may actually be more effective than vitamin D3 in reaching normal levels of vitamin D in the blood.

Thus, it appears that vitamin D3 may be the better choice of the two if you are considering increasing your daily vitamin D intake.

Now, you may or may not have read that long-term intake of vitamin D can actually have adverse effects, such as too much calcium in the blood, a condition known as hypercalcemia.

The downside of hypercalcemia is it is associated with a variety of cardiovascular health complications.

However, studies are beginning to show that long-term vitamin D intake may not actually be responsible for too much calcium in the blood.

In fact, it may be due to low levels of vitamin K!

The thing is, a number of these proteins actually require vitamin K to function properly.

So, if you do not have enough vitamin K in your blood, these proteins can begin to cause problems.

With this in mind, it is without question that vitamin K is an important compound to include if you are planning to take vitamin D supplements…especially long-term.

Tell Me A Little More About Vitamin K

As it turns out, a significant number (up to 31%) of people are also deficient in vitamin K.

Importantly, it’s also been shown that vitamin K has immune boosting and antioxidant properties, while vitamin K deficiency has been linked to a number of health complications.

Much like vitamin D, vitamin K has its own list of precursors that can be transformed into the biologically active compound.

Specifically, vitamin K1 and vitamin K2 are the most widely known compounds that are transformed into vitamin K in the body.

And, similar to vitamin D, there are studies showing that vitamin K2 is more effective and active than K1 when it comes to producing vitamin K.

Other studies have shown that vitamin K2 is also better at preventing bone fractures and protecting the heart and blood vessels from health issues like atherosclerosis.

What Happens When We Put Them Together?

Now, we’ve talked about how vitamin D3 and K2 may just be the best precursor compounds to achieve normal levels of vitamin D and K in the blood, respectively.

But what happens when they are combined?

Well, it appears that good things tend to happen.

For example, when vitamin D and K were given to rodents who were experiencing low estrogen levels (a sex hormone), the combined supplement was able to prevent issues in bone health that normally happen when estrogen levels are low.

This protective effect was not found when rodents were given vitamin D or vitamin K alone.

This is an important finding, as it suggests that vitamin D3K2 supplements may be appealing to women experiencing low estrogen levels (i.e., post-menopause).

The combination effects extend beyond their actions on bone health, however, as studies have also shown that vitamin D+K supplementation can also increase the health of heart and blood vessels.

In another study, rats were given the drug called warfarin. Now, warfarin is known to completely block vitamin K activity.

So, by giving warfarin to rats, the authors of this study were able to see what happens when vitamin K activity is “artificially” reduced.

Interestingly, they found that blocking vitamin K increased calcium levels in the blood, causing health issues with the blood vessels.

And, this calcium increase happened much faster if rats were given warfarin AND vitamin D.

Remember, vitamin K is important for calcium absorption from the blood, and when vitamin D levels increase, so does calcium.

If vitamin K is not around to soak up the calcium, calcium levels rise above normal levels.

So, in this case, rats given vitamin D experienced increased calcium levels in the blood.

Combined effects on metabolism and inflammation

Lastly, combining vitamin D and K was found to have positive effects on glucose metabolism and inflammation.

Specifically, supplementing with vitamin D+K for 8 weeks improved the activity of insulin, which is a molecule that signals cells in the body to absorb glucose, or sugar.

So, properly functioning insulin is important to overall health and it seems that vitamin D and K are necessary in this process.

Alright, So What Should I Take Away From This?

There is clear evidence that vitamin D and K are important for a healthy body and mind.

But what’s more important is the evidence which suggests a synergistic effect of these vitamins when combined together.

Knowing that long-term vitamin D supplementation can increase calcium levels, and that vitamin K is responsible for regulating calcium levels in the blood, it is no question as to how their combination can be beneficial in reducing long-term negative effects of high blood levels of calcium.

As an important note, this combination may not be for everybody, as it is clear that drugs that are commonly prescribed, such as warfarin, can actually block the activity of vitamin K.

So, it is best to consult a medical professional as to whether vitamin D2K3 supplementation is suitable for you.

Overall, the effects of combined vitamins D and K tend to be positive and beneficial, especially regarding bone and cardiovascular health.

However, special attention must be given towards people diagnosed with a medical condition that requires medication known to interact with either vitamin.

As always, consult your physician before altering components of your diet, including vitamin/mineral intake. 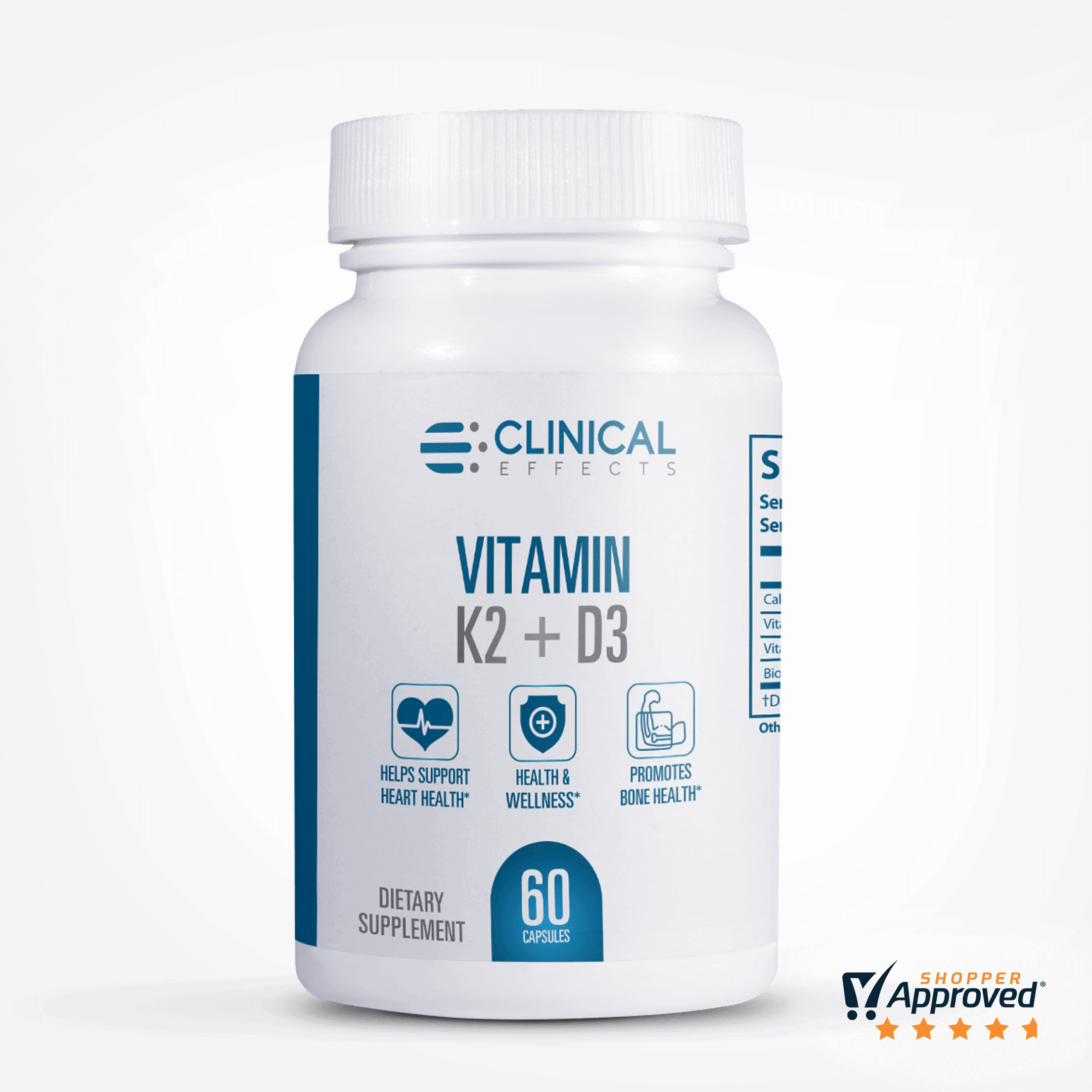